With the explosion of vegan-friendly options hitting supermarket stocks, it’s no shocking that a vegan might observe the inclusion of a lactose-free butter replacement called desi ghee and wonder if it’s also vegan-friendly.

In almost all scenarios, it is not. Desi ghee is a dairy product, and even though the milk solids have been taken out from the final residue, delivery is totally lactose-free but grass-fed cow ghee is not dairy-free or vegan.

Fortunately, there are several available options to butter, and many restaurants that traditionally prefer desi ghee are offering more vegan alternatives.

A Bit About Veganism

If you want to discuss whether ghee is actually vegan or not, you have to know a bit about what veganism actually is? Some folks have different understandings as to what actually includes veganism.

In its strictest sense, veganism is a philosophy that avoids any form of animal product. That means not only meat and fish but anything that is obtained from any animal source.

However, many vegans who believe in Lacto-Ovo vegetarians are vegetarian, but they include eggs and drink milk in their diet. Pescetarians consume fish but are otherwise vegans. Additionally, some vegans prefer to eat honey (a product obtained from bees) and/or ghee or Ghruta from cows.

Read More : WHY DOES DESI COW GHEE IS THE MOST NUTRITIOUS CHOICE

Why Grass-fed Ghee Is Usually Not Vegan

Ghee is a kind of animal-derived fat made from cow milk. When butter gets boiled, the water present in the butterfat evaporates off, and the milk solids are removed from the liquid.

In contrast to other clarified types of butter, ghee is simmered for a long time making it a distinct nutty, rich flavor. Most desi cow ghee is preferably made from cow milk, so it is a non-vegan food.

Since the milk solids are evaporated during the clarifying heating process, some pure form ghee is labeled lactose-free. That labeling, however, doesn’t imply that the ghee is vegan or even dairy-free.

According to some definitions, desi ghee is an animal product but due to clarifying processes, is suitable for vegans.

Desi cow ghee is not vegan because it is made with milk from cows. On the vegan plan, no animal flesh or animal-derived foods also you can’t involve dairy items like milk, butter, and cream can be allowed.

However, desi ghee is lactose-free and casein-free. Therefore, if you’re not vegan and worrying about lactose’s impact on your gut, desi ghee might be nutritious for you to try out.

Read More : Ayurveda and the Golden Goodness of Ghee

Ghee is nothing but a form of clarified butter that has been utilized for centuries in Indian cooking. It’s also trending worldwide as a mainstream health food. The word “ghee” is actually nothing but clarified butter which makes sense because after boiling butter to take out the milk solids, desi ghee is pure butterfat.

Since ghee is basically butterfat, it includes more healthy fats than butter which can help in weight loss and even lower cholesterol levels.

What is the catch with ghee? Why do some people call it non-vegan?

Ghee is a byproduct of milk, and when this dairy element is procured from cow milk, it originates from an animal. It is also called clarified butter, desi ghee is made by churning wooden bilona under the slow-cooking process.

The moisture content of milk solids gets easily evaporated. When ghee residue gets more clarified, it turns into golden clarified liquid ghee.

In this ghee-preparation method, regular milk solid or grass-fed milk fat gets free from dairy proteins for example lactose and casein. It is one of the factors that ghee mostly avoids allergy risk for lactose and casein sensitivity.

However, as ghee is obtained from an animal product, it is asserted by a few vegan followers that desi cow ghee should be included as pure vegan food.

It means that people on a strict vegan diet will probably discard having desi ghee in their food, but it totally depends on you what nutrition you want to ingest by considering your health scenarios.

Some people claims, ghee is vegan

According to some vegan freaks, desi ghee includes butterfat and is obtained from animal products (milk). This is the thinking, it cannot be considered vegan.

But people often say that during the manufacturing method, the milk part gets completely taken out from desi ghee, and that is why desi cow ghee becomes a completely fat-based product.

The healthy saturated fat content of desi cow ghee is the cause for calling it Keto diet and Paleo diet-friendly. Finally, the answer to the question is desi ghee vegan becomes surely baseless.

Grass-fed ghee is made from grass-fed cow milk, and in terms of nutrition, ghee consists of healthy fat, milk protein, milk sugar, and negligible moisture.

Is Desi Cow Ghee Vegan or Not Hardly Matters

Ghee is derived from cultured or dairy milk butter, typically by simmering the milk solids the butterfat and moisture in the heating pot get evaporated from the milk solids.

Differing from a standard clarified butter with ghee, it is typically simmered for a longer time to get a nuttier flavor. In front of the abundant benefits of desi cow ghee, it doesn’t matter if ghee is vegan or not.

Organic grass-fed cow ghee is a lactose and casein-free dairy element and is suitable for folks with lactose sensitivity. It is recommended in making vegan recipes in many kitchens even, concept-wise it is not a vegan ingredient.

Always prefer 100% grass-fed pure ghee, it is natural and pure, authenticated. Grass-fed ghee is one of the healthiest alternatives for safe cooking oil with a high smoking point.

Grass-fed cow ghee is available for online purchase as well as in grocery stores for regular shopping. It is preferred by lots of vegan freaks without worrying if ghee is vegan or not.

We at Suresh Foods makes the best quality grass-fed ghee followed by the traditional Vedic method, so you can order it online from here: www.SureshFoods.com 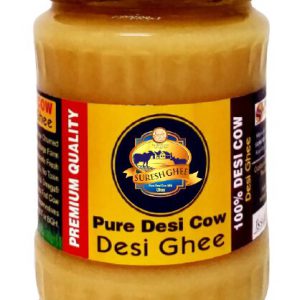 Rated 4 out of 5
REVIEWS >
Disclaimer : The content on this page and on this website, are strictly for educational purposes only and NOT to be considered medical advice. Always seek the advice of your physician or other qualified healthcare provider concerning questions you have regarding a medical condition, and before starting, stopping or modifying any treatment or medication. In the case of a health emergency, seek immediate assistance from emergency personnel. Never delay obtaining medical advice or disregard medical advice because of something you have or have not read on this post / website / Video. Healthcare professionals should exercise their own clinical judgment when using our content, tools or databases.
Rs 2390

All product images shown in the website are for illustration purpose. Actual product may vary.